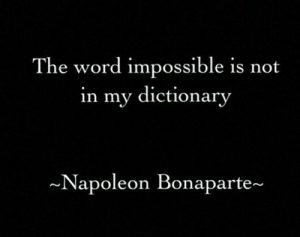 Seeing Things As They Really Are

Seeing things as we would like them to be is an imaginative, invisible, and creative process. It could also be viewed by conservative standards as having a rich fantasy life, or engaging in wishful thinking.

Conventional political and legal systems very frequently operate on the belief of proximity, probability, potentiality and foreseeability. Routinely, people will draft documents to incorporate and annex particulars they would like to see happen or not like to see happen at given points in the future.

Seeings things as we would like to see them, or prefer to see them, may involve a form of active participation through visualisation practices.

We do it everyday already anytime we are thinking or imagining what we will be doing at a later point in time during the day or evening, or perhaps the next day, week or month. Those points in time have not even happened but we anticipate that they will happen and treat them accordingly because we believe that the future is real.

More than a rudimentary exercise in organisational diary management, we might call it or perceive it as a form of spiritual manifestation because we are actively visually enhancing a creative thought process that is on it’s journey to eventuating into an authentic reality.

The more important or significant something to us is, the greater the obstacle we face in overcoming our aversion to seeing it as it really is because if we had the choice, we would probably not choose to purposely look at things that cause us to feel grief, angst or displeasure.

If we could put our trepidation, fear or aversion aside and just see something as it really is, we could potentially find ourselves better situated to being able to creatively imagine what it is that we would like our new authentic reality to be.

Some people believe that this practice in and of itself is sufficient enough to manifest significant practical change.

We can certainly respect and acknowledge this as holding validity within a spiritual or religious context because practically every single religion or spiritual belief already incorporates the notion of reflective or meditative practice.

We could also entertain this concept of manifesting better outcomes as putting positive thinking into action, a random stroke of good luck, the productive result of hard work, divine serendipity, or a universal shenanigan.

Trying to remain open and optimistic, to carry on and to keep doing whatever it is that we do, when we are seeing things as they really are and not as we would like them to be, might be the very way to go about manifesting the changes we seek.