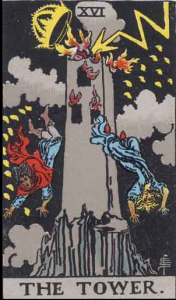 “The tree which moves some to tears of joy is in the eyes of others only a green thing that stands in the way.”

The Rider-Waite Tarot deck of cards is uniquely different from standard playing cards that house a suit of hearts, spades, aces, diamonds and clubs. Tarot cards are used by psychics and spiritualists when they communicate revelations; these cards are believed to hold either an identifying characteristic of the subject querent or foretell one’s past, present or future fate.

Each card from the tarot deck has been illustrated with images that is believed to provide clarity in relationship to a question asked by the seeker of truth. Some imagery can appear quite catastrophic at face value; “The Tower” card is a case in point.

There is the possibility that the two escapees who flung themselves from the tower found themselves plunging gracefully into the safety of water or maybe their fall was doomed from the moment they left the tower.

Perhaps the two didn’t die on sudden impact but fortuitously survived and were airlifted by helicopter to the nearest hospital where they had surgery, followed by physiotherapy, and healed quite swiftly.

Maybe part of their healing was not just physical but mental, emotional and spiritual. And so the two lucky fire escapees reflected on why the fire even started to begin with – they had ensured that all electrical work and rewiring had taken place prior to buying the tower and only after purchasing the property did they discover that the electrician performing the work was not qualified to do the specific form of rewiring their tower needed.

Possibly, and in the absence of all other reasonable explanations, they might have implicated God or a fallen angel as the culprit that disrupted their happiness in their tower of love.

This card can symbolically mean that events that disrupt our lives can alter the direction of our current life paths.

We cannot really call these events mistakes unless we ourselves caused these disruptions intentionally.

Not all disruptions are events that we planned and it can feel like we don’t have a choice. We might find that we are clinging to this notion, ‘I didn’t have a choice’, for such a long time that we feel restrained to act. Yet we can act because once a disruption erupts it has already begun to lose its potency.

Disturbance or problems which interrupt an event, activity, or process.

Disturbances can be created by ourselves or by other people and they can happen randomly and without provocation.

To offer an example;

You are excited that you will be seeing your friend who is flying in from another state and you are about to leave your home to go to the shops to buy some ingredients to welcome them to a home-cooked meal when all of a sudden you hear breaking glass and discover that your glass window has been accidentally broken. You get down on all fours and pick up every tiny piece of glass off from the floor and then you call someone to come over as soon as possible and replace the glass. You have some time to work with, your friend is 1 and a half hours away by flight and the bloke who will be fixing your window is a local and not too far away. On the phone he said he’d only be 15 minutes and it is now half an hour later and he hasn’t arrived. You ring the glass guy again and he says he is just around the corner – which sounds literal to you but was not meant to be taken literally. He shows up an hour later and launches into the world’s longest and most boring commentary on the history of glass and windows. It seems as though he will not stop talking, he is a lot more into this window situation then you are and you don’t want to seem rude but you can take the torture no more and end up interrupting him so you can go and get what you need done and so you leave him alone so that he can get to work and fix your window. The glass guy feels offended by your lack of interest. He is so deeply offended, because you failed to take his work seriously enough or you failed to pay homage to his greatness or artistry or whatever, that when you leave the house he leaves your place as well and makes you wait until the next day to fix your window. Your poor guest is now sleeping in a room which has a portion of a cardboard box stuck to your wall and a window drawn on it all because you hurt the glass guy’s feelings because you didn’t give him the adequate amount of admiration or attention that he felt he deserved.

The glass guy, who is in his late 30s, goes home and immediately rings his mum up and with angry tears in his eyes he clenches his hand into an angry fist and in his squeaky voice he tells his mother what a mean and evil bitch you are. You are the worst customer he has ever had in all of his life and how dare you not listen to his FREE 2 hour lecture on the history of glass and the origins of windows? His mum listens, forever patient, and says to him;

“Dicky (that’s his name short for Richard) Dicky, that woman is an ungrateful bitch! Oh she makes me quite mad! I don’t like the sound of her one bit. She obviously is a very sick woman and needs therapy. Don’t you worry about her my boy, mummy loves you.”

Dicky is pathologically compelled to interrupt and disrupt women. He would very often overbook himself and wouldn’t fix their broken windows. He didn’t really care about their broken windows because what he cared about was getting their admiration and attention.

Dicky, and his insatiable need for approval and admiration, made him repugnant to every woman who got to know him. He really was the kind of person who could drive a woman into the arms of a chemical lab technician.

Unfortunately, we can’t always know before hand if Dicky the glass-cutter or his female equivalent Titty – the manicurist is going to enter our lives and disrupt our imperfect but otherwise happy life.There will always be people who seem to drain our energy like parasitic leeches, empty souls wondering around cluelessly and without purpose, and what a shame these creatures have a pathological compulsion or desperate need to negatively disrupt other people who are living their life happily without them in it.