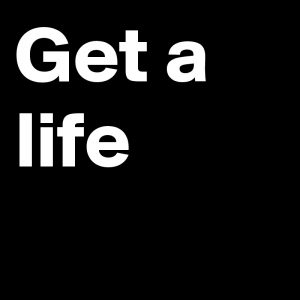 “Get A Life is an idiom and catch phrase that has gained international usage. It is intended as a taunt to indicate that the person being so addressed is devoting an inordinate amount of time to trivial or hopeless matters.” (Wikipedia)

To tell another person to “Get a Life” could be viewed as a touch on the provocative side but it is also an expression used by one person to another, perhaps several, to illustrate to others that the person making the statement is very concerned that with all the more delightful and supremely happier possibilities or options available in the universe that he/she/they decided instead to invest their time stupidly by wasting it on petty and unimportant inconsequential matters.

Of course some of us could just as easily say, “Go Fuck Yourself” but because we have inserted the word “fuck” in-between two other words, which are identified as common usage words in the English language being; “go” and “yourself,” the person receiving the message may not take ownership of their time, and just how much of it they are choosing to invest in petty and unimportant matters.

They might be vacuously minded and henceforth pathetically cry and deny their irrelevant and petty use of their time and instead feign badly acted shocked outrage at the beastly person who generated the heinous expression and verbally spewed forth the profanity known throughout the Western World as the word “fuck” which traveled safely and reached their flavourless and dim witted vicinity.

We must try to acknowledge, all of us, myself included, and I am so serious and sincere when I say this, that whenever we tell another person, or even several others, at the same time or at different times to “Go Fuck Yourself” or the plural, “Go Fuck Yourselves,” we might potentially be triggering people to be unnecessarily alarmed and take the things we say to them literally!!!

I am not telling anybody what to think or to make assumptions about just how stupid people can be but just give the following matter some deep consideration;

What goes on in a dim witted person’s mind that alarms them so when they have been instructed to “go fuck themselves” is a highly contentious issue that the greatest philosophers and academics just cannot unanimously agree upon.

How we know this is that some of these great minds might regard the expression, “Go Fuck Yourself” to be taken in the literal context, not metaphorically, philosophically, theologically or spiritually, and may then start to wonder; exactly how is one to go about it?

Physically fucking oneself might be impractical or unsuitable. It could also be genetically impossible. Others might not be so easily perturbed, particularly those who fuck themselves all the time.

People can get creative and rely upon purchases they made in bawdy, rude or lewd commercially classified adult sex shops, some may already have a stash or a collection, a fashionable array of multicoloured artifacts commonly known as “dildo’s” or “vibrators” hidden discreetly in their lily of the valley scented Chester drawers which they can switch on or manually deposit in whatever orifice they so eagerly desire.

In winding up the right people and concluding this titillating discussion about the expression; “Get a Life,” we can possibly see that what might appear to be an innocuous statement intended to help another think about using their time on this great earth for matters not petty or irrelevant, we could equally and just as easily find ourselves telling another to “Go Fuck Yourself” and still mean it to be taken kindly, yet this expression might prove to be more challenging, for some people might take it in the literal context and not in the context of considering using their time to not be petty and irrelevant and causing people such as myself to write an article to explain all this to them.

For even those we might consider to be petty, irrelevant and inconsequential wasters of time serve a purpose and have inspired some of us to use their idiotic nonsense for our own deep pleasure and great satisfaction.