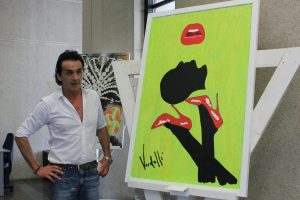 Marcello Vandelli is a notable Artist ruling from Modena, Italy. Modena has eminently birthed many greats; Mary of Modena, Luciano Pavarotti, Mirella Freni and none other than fulfiller of midlife male fantasy himself, Mr Enzo Ferrari. We can appreciate that Modena has many great things to offer and we are intrigued to further investigate the greatness of the Vandelli brand. Within the confinement of the European elitist artistic establishment, Marcello’s work has been captured as a form of “deconstructed deconstruction.” To break down the “code” or unravel what “it” is about a Vandelli painting, is to dive deeply and swim or sink through life. His work is occupied with the uncontrollable past, the unquiet present, and the unforeseeable future. The circle of life, life’s revolving door.  Each of us lives in a piece of Vandelli’s art. Marcello’s ability to intuit people is a blessing, it is the mark which distinguishes all artists. Demons and Angels, Anchors and Oceans, Heaven and Earth, Women and Men, Crucifixion and Freedom, Children and Innocence, Business and Pleasure – his dominant themes are as old as time immemorial but they carry a representation of truth. A Vandelli painting has its own signature scent and this is what makes it a work of art.

Ladies and gentlemen I present to you Marcello Vandelli.

Q
Your biography on your website quotes the following;

“The difference between art and life is that art is more bearable.”

What does that mean to you?

A
Life is often devoid of certainties,  art is the gateway to the liberation of the soul and the awareness of the self. It is concrete, reliable, solid in its representation, allows the mind to imagine and dream, giving it freedom.

Q
You have described your life as throwing some unexpected events and experiences which have allowed you to flourish as an Artist. Can you tell us more about your life experiences that have helped you develop your work in your following paintings?

A
I was born on August 28, 1958 in San Felice sul Panaro, in the province of Modena. My personal life has been full of experiences, adventures and unexpected events that have allowed the artist hidden in me to be born and grow up. After touring the world and coming back to my homeland, I started to create, starting to paint like a revenant pollock in the barn of my property, in contact with the memory of my land and spiritually close to the great masters who have me grown up. My artistic intuitions are the expression of a tormented spirit that wants to explode in a liberating cry. They are an intense explosion of psychic energy that finds evidence in the contrast between straight lines and curves, warm and bright colours, cold and dark. Obsessed with the problems of life and death, my thoughts are transformed into words, colours, shapes, representing the existential condition of modern man, afflicted by loneliness, incommunicability, anguish. My inner malaise leads me to introspection, to closure towards the external world, to loneliness. This apparently negative condition leads me to reasoning and knowledge of the self … In this the spirit rises, emerges from the abyss, is reborn.

I have selected a beautiful collection of some of Marcello Vandelli’s Art.

Q
Where was “Ancora Christi” exhibited?

A
This large work has been exhibited for over a year in the main square of the city of Mirandola, in the province of Modena. Born as a result of the earthquakes of 2012 that have hit my homeland hard, this work seeks to convey a message of hope and rebirth.

Q
You have a book as well – where can it be purchased? 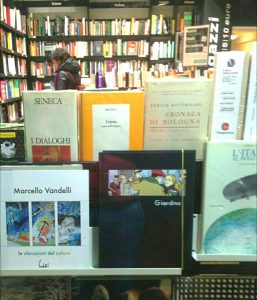 A
My first book concerns the personal exhibition, “The Vibrations of Color” held in the city of Mirandola in the autumn of 2015. At the moment there are no reprints. We have, however, planned a new book that will collect most of my works, from the beginning until today, with the preface of a well-known Italian art critic.

Q
The well-known Italian politician, art critic and writer Vittorio Sgarbi is also a fan of your work, what has he told you are his favourite paintings of yours?

A
It was a great honour for me to receive the attention of a well-known art critic, Vittorio Sgarbi. He noticed one of my works during a collective exhibition in Monreale, Sicily. The work is titled, “The depression is a gift from God.“ 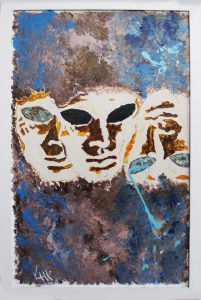 “The depression is a gift from God”

The result was the drafting of a short monograph containing a selection of works accompanied by a critical text by Vittorio Sgarbi that I would like to cite below in order not to diminish its content.

“Singular. Not unlike, I think, the painting of the Emilian Marcello Vandelli could be defined in a more concise and timely manner. Singular because it corresponds to a precise individuality, not only artistic, but also of thought, with a very precise vision of things, which even if not considered highly original, is framed and codified in a way that is difficult to assimilate to others.

Singular also because of the heterogeneity of the formal solutions through which that individuality of thought communicates, the majority of which finds little feedback outside of its context. the premise of any discourse on Vandelli is to be found in an affirmation of the same: art is the highest expression of conscience. More than any verbal speech, therefore, more than any written work.

Possible? Yes, if we understand consciousness as something verbally indefinable, or at least elusive to the descriptive and explicative possibilities of verbal language. If consciousness is not, and never could be prosaic, as suspected that Vandelli believes, then only art, because of the intrinsic lyricism of its nature, could grasp its meaning, even if it translates it into necessarily indirect, allusive rather than explicitly declared.

In being, therefore, a field of philosophical reflection on the meaning of life, the art of Vandelli communicates according to a register that can be defined as symbolist, accompanying each creation with appropriate interpretative legends.

The singularity lies in the fact that the symbolism that Vandelli uses is largely unprecedented, distorting many of the semantic relationships between concept and image to which we are accustomed. Vandelli, for example, is Christian, but in an anomalous, almost heretical way, the most fundamentalists would say, to the point of allowing, as a new patristic champion, to attribute to the Savior an unknown metaphor, the anchor, or to overturn the most traditional symbolism (the peacock, which becomes an auspicious symbol of mourning). All this using a very modern, extremely mobile and ductile painting, most often in an unpredictable way, only in some cases resembling the more angelic Licini or the more liquid Schifano. “  Vittorio Sgarbi

A
In May I will hold one of my personal shows, entitled ” The Genius language ” in a splendid location in the city of Bologna. The event will be presented by the critic Vittorio Sgarbi. We are working on other projects planned for the end of the year, including an important exhibition in Rome.

Thank-you so much Marcello for joining us on Pizazz News. I wish you every success in 2018 and beyond, and I very much look forward to seeing more of your beautiful work.