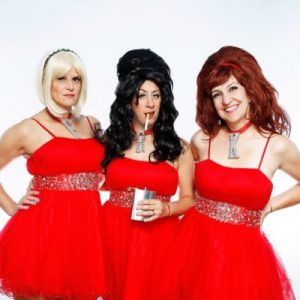 The Boobé Sisters are three enchanting vixens. There is the redhead “smart” one, Kaye Boobé, the blonde “sexy” one, Faye Boobé, and then we have the brunette “hammered” one, Renee Boobé. Kaye, Faye and Renee Boobé, have performed to millions of audiences on shows such as America’s Got Talent, The Gong Show, and the Razzie Awards; America’s Got Talent reached over 16.2 million viewers last year alone. This trio of songstresses’ have pooled their talents and resources together to join forces and parody 1960s song classics. Their parodies are intelligently and skilfully composed, and they have performed their acts regularly and headlined at venues such as; The Lab, Hollywood Improv, Flappers Comedy Club, The Icehouse Comedy Club, Madhouse Comedy Club, and the Burbank Comedy Festival. Apart from their shenanigans, they are romantics at heart and have written a sweet juicy love song dedication to the Canadian Prime Minister, Justin Trudeau.

Ladies and Gentlemen, it is a total joy to introduce the amazing trio which is “The Boobe Sisters” to PIZAZZ NEWS. 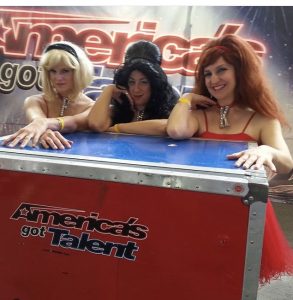 Q
Kaye, Faye and Renee Boobé what did it feel like for you ladies when you were performing live on America’s Got Talent?

Renee: I performed on AGT? Wow. That’s trippy. Did I make out with Simon Cowell or am I just remembering a weird dream?

Kaye: Performing on AGT was surreal. When we entered the stage the whole audience of 3,500 people went crazy and screamed for us. When I looked down and saw the judges I thought to myself, I think this is the first time I have ever seen this show and it’s from the stage? Life is so unpredictable.

Faye: Well, I was making out with the opera-singing/body-builder who plays piano with his hands on fire and almost didn’t make it to the stage on time. I can’t really remember his name, but I will tell you he has other talents as well.

*Showing up really is half the battle.

Q
Which one of your songs did you choose to sing and what did the audience and celebrity judges think of your performance?

A
Renee: I may not have been conscious, nor do I remember the song, but I’m pretty sure we won the whole contest.

Faye: I think if we had been 14 years old and unsigned by a record company, our act would have gone over much better.

Q
Would you go back on America’s Got Talent? What, if anything, would you do differently?

A
Renee: I would TOTALLY go back on AGT, for like 5 million dollars. I might want to try and remember it next time.

Kaye: Sure, I agree with Reneé, I would go back on the show in a heartbeat if they paid us 5 million dollars and if Howard Stern was a judge and not Howie Mandel.

Faye: I’d only go back if the super-hot dude with the acrobatic group also came back. One of my great regrets in life is not sleeping with that super bendy piece of art.

Q
On “The Gong Show”, was that cheeky host who called you all “Cunning-Linguists” Mike Myers?

A
Renee: Now, THIS I remember! That was totally Mike Myers, and he looks fabulous when you look up at him from the floor!

Faye: If it was Mike Myers, I’m glad we all survived! I’m surprised he was willing to do the show without the mask.

“The Gong Show” with The Boobé Sisters

Q
Would The Gong Show appreciate your hit single, “Down Town”? Do you think Elisabeth Banks would “Acca-love-it”?

Kaye: We tried to sing “Downtown” on The Gong Show, but when we received our lyrics back from the censors, there were more words crossed out than words we could sing. So, we did our “Tinder” song instead and am very proud to say that we got a dick joke on national broadcast television!

Faye: Dick jokes are the best. Except when they are true.

Q
You perform regularly at Flapper’s Comedy Club, its sounds like a fabulous venue, what kind of drinks do they specialise in making?

Kaye: Reneé can answer that better than I, but I do love their chocolate chip cookies. Fabulous

Faye: The bartenders there are amazing. They’ll fix you right up with whatever gets you off, I mean whatever turns you on…oh nevermind the drinks are strong and do exactly what they are supposed to do!

The Boobé Sisters singing, “Down Town”

Q
Renee loves a drink and getting hammered so are you Renee a beer, wine or spirits gal? And do they ever let you behind the bar at Flapper’s? I’d imagine you’d kill it at making cocktails.

A
Renee: Yes – is the answer to your first question! I don’t know if they necessarily “let” me be behind the bar. But, I’d like to see them try and stop me. I’ll say, I’m really good at mixing booze together to make mixed booze.

Q
Faye, you’re always impressed with the blokes at Flapper’s, or anyplace in general, what is it about Justin Trudeau that makes him so special to you?

A
Faye: He’s in charge of an ENTIRE COUNTRY and LOOKS LIKE THAT. Google any politician anywhere in any country for comparative reference. I’m suddenly feeling hot.

Q
You ladies have a lovely gift, not just as comedians, but also in connecting with your audience. Kaye, what kind of special events do you enjoy hosting the most?

Kaye: Yes, I LOVE hosting parties, especially theme parties! Every year I host a White Trash Picnic to relieve my youth. I also have hosted a Nerd/Spelling Bee party, 80’s Live Aid Party and Vicars and Tarts party. The only party I host that does not require a costume is my Halloween Party, go figure.

“Can’t Take My Eyes Off Of You”, The  Boobé Sisters

Q
Here you all are, The Boobé Sisters, at the Razzie Awards for 2015 presenting the award for what is essentially the worst screen combo pairing for a film. “Fifty-Shades of Grey” – it made a lot of money so it was successful in that regard. How would you explain the commercial success that is “Fifty Shades of Grey”?

A
Renee: You know what? People are fucking stupid.

Kaye: Well sex sells, especially to women who are afraid to tell their partner what they want. That’s kinda what we’re here for, we like to help the ladies in our audience get that conversation started and not have to read about pleasure anymore, but actually ask for it!

Q
What kind of film genre would fit The Boobé Sisters like a glove?

Kaye: We’re a mix between a John Waters movie, an episode of Sex and The City, George Melies and an anti-bullying PSA.

Faye: If Dirty Rotten Scoundrels and Bette Midler had a baby, that would be our perfect genre. 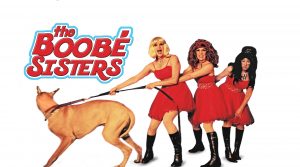 Q
Which comedians have you met already that you’d like to work with?

A
Renee: Fred Willard! We did a variety show with him, and I remember everything! I will also say, we were 6 feet from Kevin Hart at Flappers, watching him work out his new material. Though we didn’t actually “work” with him, I think he had a thing for Faye’, so we’re going to exploit that. Lastly, Ron White. I got him high once. He owes me. And, that is 100% a true story.

Kaye: I once sang for Bill Murray. I love Bill Murray. I have a sign that I hang on the front of our Boobé Sisters house in Van Nuys that says “Bill Murray can crash here”. He hasn’t stopped by yet, but I have hope. I’ve got that going for me which is nice.

Faye: Jo Anne Worley told me to get my tits out of her way so she could get through back stage at an event. So, her. Respect.

Q
Which comedians have you not met already that you think you’d like to work with?

Kaye: I am a HUGE fan of Sebastian Maniscalco. He is the voice in my head…what is WRONG with people???

“I Only Have Eyes for Jews”, The Boobé Sisters

Q
You ladies are all very positive and have such beautiful energies, I loved the theme tune to “Wonder Woman” that you all sang to this little girl; do you often do random appearances and sing in public spaces?

A
Renee: We actually sang the National Anthem not long ago at a diner! I did have to take a knee though. Only because I had been drinking Prosecco all day, and I just had a hard time staying upright.

Kaye: When we see old people we like to sing to them because we think they would like it and because they can’t get away quickly.

Faye: I usually say this mostly about myself, but we really like to spread the love.

We are all Wonder Women!

Q
Are there any behind the scenes wig pulling, nails scratching and back stabbing going on? What do three grown-up women usually fight about?

A
Renee: The only wig pulling has happened on stage! Sometimes our emphatic dance moves and lack of bobby pins can result in an unwigging. We did have to kidnap the audience so that they would never say what my real hair looks like. They are still currently being held in an undisclosed location.

Kaye: We are sisters, so we usually have the normal fights sisters have like don’t wear my clothes (though we all wear the same thing), shotgun in the car and who our father likes best!

Faye: I threw a fork at Renee once but it was meant to hit a bartender who cheated her out of an extra shot. My aim was bad, but my intention was true. Don’t f*ck with my sistas.

Q
What message would you give to other women about the benefits of women working together?

A
Renee: In all honesty, there is nothing quite like a sisterhood. There is a certain “understanding” that women have with one another. And when that understanding is celebrated and nurtured, then female collaboration can truly be very powerful.

Kaye: Seriously, in my opinion, working with women in comedy is a very different experience than working with men. I find that when I work with my sisters I do not have to fight to be heard and get recognition for my ideas.

Faye: I LOVE MEN…BUT…my most intimate relationships are always with women. We get each other, we know the struggle. I can’t tell you how many times I have heard “She’s really funny…for a woman”. MAKES ME CRAZY. The funniest people I know are women. We have to be to deal with everyone’s bullshit.

Q
On top of all your glamorous Awards’ ceremonies, television appearances and live comedy performances, you ladies are also entrepreneurial and have created and marketed your own merchandised products; CD’s, underwear and t-shirts. Where can we buy your products?

A
Renee: Everyone go on over to www.theboobesisters.com for your panties!!! Oh, and CDs and t-shirts.

Kaye: You can also purchase our songs Downtown and Justin Trudeau at CD Baby: https://store.cdbaby.com/cd/theboobesisters3 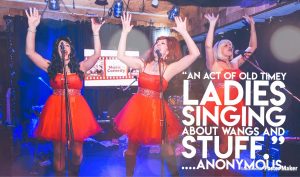 Q
What is happening next for The Boobé Sisters in 2018?

A
Renee: Total and complete world domination, which I shall toast with my favorite bubbly.

Kaye: I look forward to my ankle monitor being removed and getting the most recent address for Colin Firth. And yes, what Reneé said, world domination!

Faye: I’m on board for world domination. Justin Trudeau can be our vice-president. 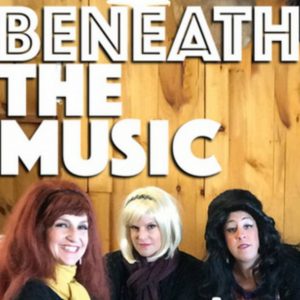 Faye, Renee and Kaye Boobé, thank-you so much for providing such a splendid interview for PIZAZZ NEWS. I love your songs and shenanigans and think you are all such beautiful, talented, and AMAZING women.  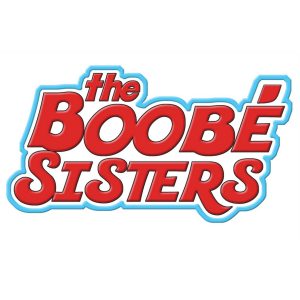