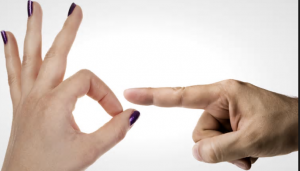 This is the question.

WARNING: This piece is written without the F word. But we did use the C and the D word respectively and respectfully in the title to compensate as if you put a dick and a cunt together – a fuck will eventuate, particularly if they were to fall accidently or purposefully into each other. We decided to be proactive and to do something about it, because that’s how people get away with writing things without the use of profanity, they don’t insert the F word at all. We represent writers who think the F word has a place in our society just as much as any other word or letters in the alphabet. It is this level of deepness and meaningfulness that we all strive to arrive at as writers. Thankfully, we did not go to Harvard, and so we were able to find a solution. We have successfully ended up using the F word as nature intended. How beautiful, and how very fucking Australian of us.

Cat: Some people are perfectly fine and feel quite justified in their cunty or dicky behaviour. It’s a choice isn’t it? Don’t we all have a choice as to whether we act like cunts or dicks or not?

Bex: Yes of course it’s always a choice, but choose the situation.

Cat: When is it justified to be a cunt or a dick?

Bex: When someone is doing it to you.

Cat: Yes, well it’s a funny thing how people who act like cunts or dicks don’t seem to respond very well when they get treated in the shitty manner which falls under cunty/dicky behavior.

Bex: Well how do you define cunty/dicky behaviour?

Cat: Obviously when words and actions injure or hurt someone else. Its like a virus that spreads – once you start being a cunt or a dick, others respond in the same manner, and then you’ve got a shit fight on your hands.

Bex: Yes, it spirals out of control, like diarrhea.

Bex: Yeah no one likes getting stabbed so sometimes just walking away is the best solution.

Cat: Man it was not easy writing this without the F word once but we proved it can be done.