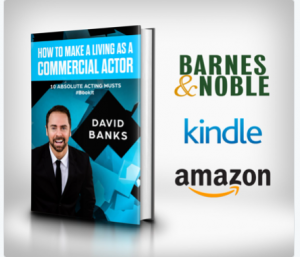 If there is one practical and useful book Actors should invest in purchasing it is David Banks “HOW TO MAKE A LIVING AS A COMMERCIAL ACTOR.” Before I tell you why I am endorsing this book, consider who it is that has written this book, David Banks. If you don’t already live in Hollywood and know who he is all you need to know is that he has successfully booked over 200 U.S National Commercials. Those commercials endorse brands of globally recognised companies such as Samsung, Honda, Hyundai, Mitsubishi, Time Warner, Mastercard, TruMoo, Rexona and Jeep. Heather Graham selected him to work on her first Directorial Debut and David can include in his theatrical credits a string of celebrities he has worked with including; Danny Trejo, Lisa Kudrow, Johnny Knoxville, Molly Shannon, Janeane Garofalo, Dominic Polcino, Stephanie Beatriz, Jason Lewis, Luke Arnold, Chris D’Elia and numerous others. David is incredibly humble about who he knows and who he has worked with, and I have researched his work and his book independently.

One of the beautiful things in life is getting to know people for who they really are, and what they truly stand for, and in all my dealings with David Banks, and how I have observed him interact with others; colleagues, fans and strangers alike, he has kindness in his heart, a delightful sense of humor, and if I can see all that, others can to.

“Casting Directors know exactly what they need
and have a set of go-to actors for each and every job.
Now it’s your job to get on that list.”

Thankfully, his book is written in a manner which gets the points quickly across comprehensibly; he doesn’t waste time in getting down to the nitty gritty of what Actors need to know and the strategies he used which worked, and what he did that didn’t work. He illustrates many compelling arguments about why Actors need to consider more than just knowing their lines, their ability to emote, their technical training, and even relying on their looks alone. Chapter 1 is titled “Standing Out and Making It Your Own”. He recommends the benefits of having a Tag and Multiple Tags when you audition and what that means. And no, it is not a name tag, but something which you do after you have said your lines in your auditions. He discusses wardrobe and identifies specific clothing items you will need in your closet, he accurately explains why you need to present yourself in a particular manner; from the perspective of casting, the people who will book you or call you back. He describes what can occur before you even start the audition and what a Session Director can do to enhance or negate your audition – including deleting your audition because of how you came across. Yes, it is personal. He explains what some unscrupulous actors do in the waiting room, how to identify what they are doing, and how best to protect yourself against their tactics that will ruin your ability to give your best audition.

This book is for people who want to get jobs. It is commercially focussed, just as the title screams out in capital letters. What this book does is offer you insights into how you yourself are coming across to Casting Directors, Agents, Managers and what “the room,” that place where you are auditioning in, can mean for you – not just in that “moment”, but afterwards. He tells you precisely what they are thinking of you, how they judge you, and what it is about what they just observed that led them to arrive to those conclusions. This insight is provided using specific experiences that David Banks has been privy to because of his unique relationships with the people in the industry. This is in, and of itself, knowledge that can save you unnecessary angst and knowledge you can practically apply to yourself.

David Banks discusses Casting Directors in Chapter 5 titled “Building Relationships with Casting Directors” of his book. He has also supplied a list of the names of the Top Casting Directors who get Actors working, 27 mentioned by name, so he is making it incredibly easy for Actors to do their leg work. And leg work is part of every business, not just for Actors. He points out quite correctly that your Agent gets 10% of the work you do for a reason – YOU need to do things that your Agent cannot do for you. He discusses strategies that can give you an advantage over other Actors who are also being considered for the same role. Chapter 10 contains a list of 8 highly reputable Commercial Agents, so there is solid information you can depend upon based on a man who has been through every situation you will surely encounter; from union to non-union commercial work, when you should join SAG, and even how Agents and Managers use your Social Media to assist you getting work, this book covers what every Actor should know and why they need to know it. All of this is from a working Hollywood Actor who makes a living as an Actor.

I hope this book review has been helpful to you and I genuinely wish everyone success, would love to see you all doing what you love and earning an income from it, and I hope that what I have expressed has given you an incentive to read David Banks book. Read this one, I think you will like it.