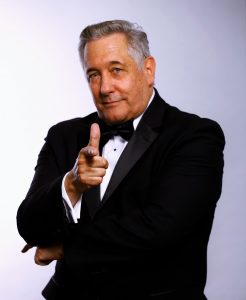 Michael Brown is an intoxicating man oozing sophistication, and oodles of charisma. He has undeniable star power, the “IT” factor, that which is intangible, difficult to articulate, but unmistakeably present in people who magnetically attract us.

He is a practicing Attorney of Law, a former political candidate, and currently treads the boards as an Actor, Producer, a Writer, and a gracious Host of numerous events. His humour is infectious and witty, one can’t help smiling in his presence.

Ladies and gentlemen, it is an absolute pleasure having Michael on Pizazz News. I know he will enthral and captivate you, my dear and much-loved Pizazz News Listeners and Readers.

Q: Tell us about Michael growing up, where was that and what was family life like for you?

A: Thank you so much for that wonderful introduction and let me say what an honour and pleasure it is to be on Pizazz News. I fell blessed to be here and hope that your listeners will find our conversation somewhat interesting. As for my personal background – Let’s see, I was born in Compton, California.  That’s right, I am straight out of Compton.  I lived in the LA area till about 8, then I moved to Northern California, then to Colorado, then to Georgia and then finally to Orange County California.  I also lived in the UK for a while for law school.   So, as you can see, I did not stay in one place too often.  My father kept getting promoted so we needed to move a lot. My parents, my sister and I were very close since we never really stayed any place long and spent most of our time together as a family.  My parents have passed, but my sister and I remain very close.

Q: What was your education like as a teenager? Were you interested in school academically or were you rebellious?

A: Being the second child, I rebelled more against my older sister than my parent to vie for their attention and approval.  So, while my sister was more of the hippie, skipped school, and smoked, I was the more studious one, honour roll, playing sports, the Boy Scouts, etc.   Every time we moved, my father would tell me to get an education and you won’t have to move like this – I took it to heart and worked at my education.  He was right and I was able to raise my family in one location, so my kids actually have a place they can say is their hometown – something I never had.

Q: Which came first for you, was it the legal career or the career in entertainment?

A: If you are speaking professionally, my legal career came first.  I did theatre in High School, but nothing professionally. I was fortunate to attend Pepperdine Law School in Malibu, California and for a while was a nanny to the son of a producer and screenwriter.   So, I did a few background things for some of the projects they were working on at the time.  It did give me a very clear idea of what the “Hollywood” lifestyle would be like which I didn’t find that conducive to the type of family life I wanted, so when I graduated law school and passed the bar, I focused on the law, got married and raised my children away from that environment.

Q: What made you decide to pursue a career in law?

A: Well, as they say, all lawyers, ministers, and politicians are just frustrated actors, so maybe it was my default. In all honesty, I enjoy solving problems, and really like helping people.  My mother always told me I should be an attorney because I argued over everything – which I did.  Early in my career I worked for the public defender’s office in sex crimes – which was disgusting, tried family law and probate, but that was too heart wrenching.  I did some litigation, but it was so acrimonious and anger filled that even if you won, you felt beat up and no one was happy.  So, I ended up focusing on business and transactions which was a very good fit for my personality and temperament. I enjoyed creating businesses, reviewing contracts, and helping my clients become more successful.  My legal career has been very rewarding to me personally and has taken me all over the world – in fact, in one year I was on 5 different continents.

After my kids were grown, and I found myself divorced and decided to venture back into the Entertainment Industry on a part-time basis, it really was a fluke. I had a client who was a very popular DJ in LA and when we were talking, he mentioned he is acting in a movie that weekend.  So, I asked how did he get into it? Did he have an agent?  He mentioned some casting websites so I went on-line, created an account, uploaded my lawyer picture from my website and just starting submitting for roles.  2 days later I was contacted and asked to play a Newscaster.  The rest as they say, is history.

Q: Is it more fun Acting as a TV Lawyer or do you prefer being a “real” one?

A: Much more fun to act as a Lawyer than being a real one.  It’s very funny to watch TV Lawyers as they seem to always have innocent clients, find all the evidence, and are in trial within weeks after the lawsuit is filed – so far from reality.  I worry about anyone who chooses the law as a profession based on the portrayal of TV Lawyers.

Q: Is it true that you played the role of Perry Mason? What was that experience like?

A: Not exactly, I did act in the new TV series Perry Mason, but not as the lead. I do believe the fact that I am a licensed attorney, helped me land the roll I did get. The new series is much darker than the one most of us are familiar with and takes place in the early 1930s when the character was originally created and written. The way lawyers practiced then was so different and more difficult.  The laws were different, like no Miranda warnings, no right to counsel, etc. and everything was manual, the research, preparing documents with carbon paper, giving dictation to a secretary. But being on set is always an experience to remember, especially the diverse group of people you meet such as police officers, doctors, etc.

Q: What is “Dumbfellas” about? Which character did you portray?

Dumbfellas is a movie my company is the Executive Producer and which I star in.  It’s a mixture of “GoodFellas” with “Dumb and Dumber” – so obviously it’s a mafia-style comedy.  Basically, two, not-so-bright, members of a “crew” are charged with finding out who murdered the other members of their “crew.”  This is their last chance to become “made men.”  So, the movie follows them as they attempt to find the killer and exact revenge.  I play the consigliere, Carmine, who is sent to accompany them on their journey to ensure they don’t get into trouble.  It starts in Las Vegas, goes out to the California desert, then to LA.  Plenty of twists and gags along the way.  In fact, the international distribution is being handled by an Australian company, so hopefully your listeners in Australia will see it on their streaming service or be able to purchase the DVD/Blue Ray in September.

Q: What characters have you Acted in and in which productions? Which roles do you find the most fun to play?

A: Wow, that’s a list that I won’t bore you with, but some of the ones I was so excited to play included; a Ford Executive in Ford vs. Ferrari, I’ve done multiple roles for People Magazine Investigates – generally as a Detective, or a Father.  I played a Newscaster in a new movie entitled “Pandementia” and was a Kellogg’s Executive for an upcoming Jerry Seinfeld special for Netflix. Many people ask, why not go for bigger roles, etc.  I guess I could, but I’ve always felt that anonymity is underrated.  I don’t mind being occasionally recognized, but I’d prefer to avoid full on celebrity status.

Q: As a Writer, what kind of genre do you write and are you working on something in your writing currently?

A: As a Writer, as with being an Actor, you like to be creative and see if you can do something new. So, I’ve done scripts for a Family movie, Crime movie, a Faith-based movie, and a Comedy TV series based loosely on a Lawyer who has a mid-life crisis and decides to become an Actor.  Currently, I am in production of a horror movie entitled “The Legend of Ice Heart” which should start filming in the fall.

Q: Tell us what Acting Legally Productions is? What does it do and where is it based?

A: Acting Legally Production is a company I created – this is when it pays to be a Lawyer, to produce low budget, non-union films for streaming services and DVD/Blue Ray sales.  Unlike the major studios, we can complete the project within a year instead of 2-3 years like they do.  There are a lot of great stories out there that just don’t have the access to be produced since most production companies are looking for the “Box Office Smash” to make a name as well as a huge profit for themselves.   We’re based in Southern California but produce wherever the right project is.

Q: Do you have any advice for anyone in the Arts or world of Entertainment with respect to their craft?

A: I’m not sure it’s advice, but more over observations. Focus on your craft, perfect it. Network till it hurts.  I’ve seen a lot of excellent Artists leave the industry because of the networking, politicking and schmoosing you need to do.  I can tell you that success in the vast majority of other industries requires the same thing to succeed as well. Above all, if you love what you do, don’t stop, or give up.  Very seldom does it happen overnight. We’ve all worked full or part-time jobs until we make it.  I’ll never forget a quote by a very renowned Volinist who was approached by a woman after a performance, and she told him “I’d give my life to play like you.”  His reply was “I did give my life to play like this.” – Hard work and sacrifice.

Q: Who are 3 of your favourite Actors/Actresses?

A: Of all time, regardless of the genre?  That is very difficult.  But I would say the Actor’s I enjoy watching the most would be Gregory Peck, Al Pacino and Paul Newman. As for actresses, Meryl Streep, Suzanne Hayward, and Claudette Colbert.

Q: What are 5 of your favourite films?

A: Again, not easy to narrow done, but I like “Gentlemen’s Agreement,” “Casablanca,” “Shawshank Redemption,” “The Color Purple,” and “To Kill A Mockingbird.” All I could watch over and over.

Q: Can you share a life quote or two that you find inspirational?

A: To Thine Own Self Be True and It’s a job, not a life – Basically don’t sell your integrity or what you believe to get to your goal cause once you obtain it, it won’t be worth it and while pursuing a goal is important, inspires, and gives purpose, don’t forget to have a life, a relationship, fun, etc. – life is way too short and shorter for others.

Q: What is one thing you have learnt about life that you wish the younger you knew?

Thank-you so much for sharing your spark, wisdom and insight! You are truly inspiring and I know many readers. leaders and listeners will find you just as FABULOUS as we do at Pizazz News. Toasting your continued success and happiness in 2022 and beyond!!